In a list of 59 countries from around the world, Portugal was considered one of the destinations with the best quality of life and work, occupying fifth position in the table. And it is even considered "home to some of the happiest expats in the world", reveals the Expat Insider 2021 survey developed by InterNations, which counted on the participation of 12,420 expats. Let's have a closer look at why expats consider Portugal the 5th best country to live and work in 2021.

In this study, around 84% of respondents say they are "happy with their life in general" in Portugal. And there are several factors that explain this satisfaction: these foreign citizens, often known as expats, who chose to live outside their homeland "enjoy a high quality of life in Portugal". Highlights in Portugal include the local leisure options, the sunny climate and safety, which expatriates value highly.

Speaking to InterNations, one British expat confirms that Portugal "is a safe and peaceful place" and also adds that "it's very beautiful, with good food, music, culture and landscapes." Then there are other subcategories where Portugal is ranked higher than average, such as the accessibility of healthcare in Portugal (73% of respondents say they are satisfied), opportunities to travel (which satisfy 86%) and easy access to telecommunication services (93% say they agree).

In summary, Portugal came in the top 10 in three indices out of the 5 analysed: quality of life (3rd), ease of settlement (9th) and cost of living (9th). And although it also scored well in the Personal Finance Index (14th), the Work Abroad Index is its weakest point (36th).

As for the impact of the Covid-19 pandemic, InterNations reveals that it "affected the relocation plans of around 2 in 5 expats in Portugal (37%), which is exactly the same proportion as the global average". Only 1% of expats intend to return home earlier than planned and "more than a quarter have decided to stay in Portugal and not return home in the near future". 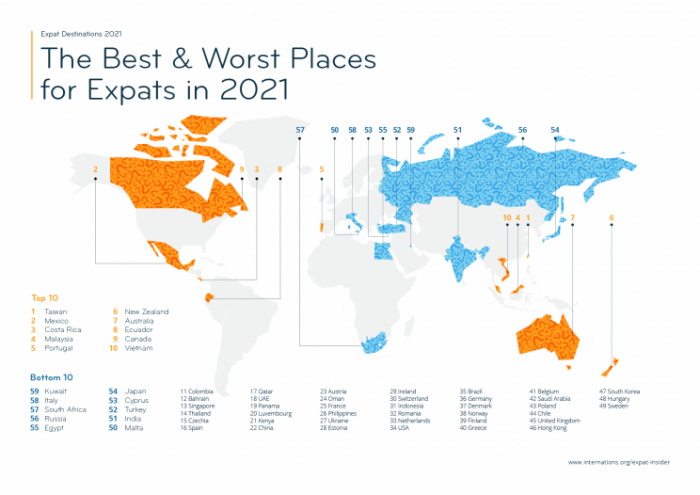 Portugal is the only European country in the top 10

Looking at the ranking of the other countries in the table it is clear that Portugal is the best country for expats in Europe. It is necessary to go down to 15th position to find the second highest ranked country in Europe by those who decided to live outside their country - the Czech Republic. Next is Spain, in 16th place.

In this list, it was Taiwan, in South East Asia, which took the top spot. In 2nd place is Mexico, in Central America. Costa Rica and Malaysia complete the top five in 3rd and 4th place respectively. The first 3 places attract "expats for their ease of settling in and good personal finances", the survey reveals. In contrast, South Africa, Italy and Kuwait occupy the 3 worst positions on the list.